Bring a Bull to the Office Party: Mechanical Bull Rental in New England 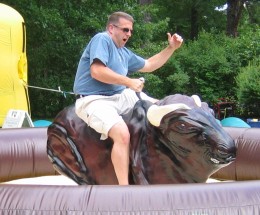 It's that time of the quarter, the one that everyone from the big boss on down to the interns dread: corporate party time. And whether you're working in a skyscraper downtown or an office in the suburbs, there is no avoiding the inevitably awkward team-building exercise weekend. It would be like something from a sitcom, except it's your life: the product launch party where nobody quite knows how relaxed they're allowed to be, so you all go about stiffly trying not to smile too broadly. Now there's something to look forward to! TGIF? Not quite…

But don't give up hope just yet! We have three words for you, three words that will forever change the way you look at office-wide events. And not just the way you look at such functions, but also the way your co-workers, your employees, and your superiors look at these office-wide events. And just what could these three magic words possibly be? Mechanical Bull Rental. In New England, a ride on a mechanical bull might not be the first thing your office-mates expect when they arrive for the official function; on the contrary, it might be the last thing they expect!

That is what makes this such a perfect addition to your next party or team-building exercise—the ice will be broken by the time Jenkins from Accounting gets tossed intothe inflatable safety barrier, and then everyone will be eagerly waiting to take their turn. What everyone worried was going to be a cringe-inducing yawn-fest just became a thrilling test of skill. If you think you know your employees, and you think they might not go in for something like this, it's time for you to think again—everyone loves an excuse to cut loose, and you can't cut much looser than a mechanical bull ride!

A mechanical bull rental in New England is surprising enough, but what if we took it one cowboy-booted step further: what about a mechanical shark? That's right, you read that correctly: instead of riding a mechanical bull with an inflatable rodeo corral surrounding them, your team could be riding a hammerhead or great white over a water-themed cushion. Everyone knows the corporate world can be like swimming with sharks, but nobody expected to be able to get on one's back! You're casual office party just turned into something from a hilarious movie.

Think about it: what makes for a better party than an unexpected activity that anyone can take part in? The sort of thing that is both fun to do and fun to watch? Give the mechanical bull a whirl and see what a difference it makes; just remember, if you bring the bull, you've got to take it for a spin yourself! One thing is certain: the water cooler chatter is going to be a lot more interesting on Monday morning!